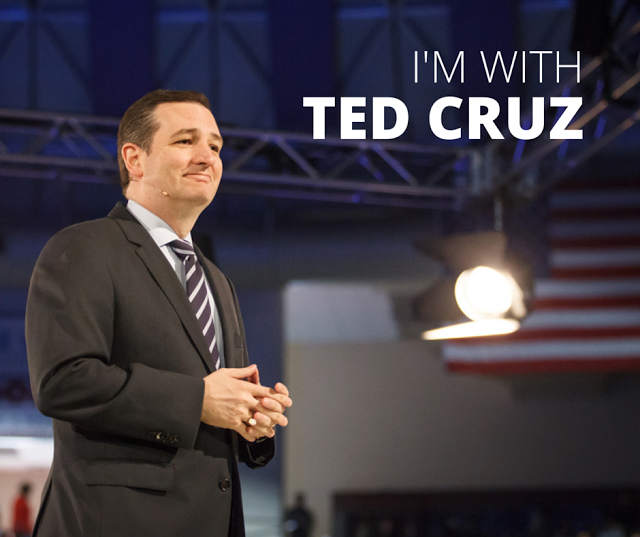 We stand at a critical time in American history. After seven years of our current administration, the American people people are tired of the liberal policies of Barack Obama. They are tired of an overreaching federal government which has trampled on our God-given rights, ignored the Constitution, and greatly restricted the freedom of the American people. After experiencing the disastrous effects of Obama's policies, we may be tempted to believe that all of our problems in government will be solved if we just elect another Republican to the White House. However, we must all understand that it is not enough to simply to put any Republican in the Oval Office. In this time of crisis, it is vitally important that we elect a Republican who truly shares our values and who will fight our enemies in both political parties. I believe that of all the candidates running in this election cycle, Ted Cruz is the best equipped one of them all to take our country back to the conservative policies of Ronald Reagan. Here are several reasons why I believe you should consider voting for Ted Cruz in the up-coming Iowa Caucuses.

Second, Cruz is a proven conservative with a consistent record. The term “conservative” is one of the most mis-used and abused terms in American politics today. If you were to ask any of the Republican candidates running for President if they are a “conservative,” they would most likely respond in the affirmative. However, true conservatism in a candidate must be judged, not by words, but by actions. I believe that Ted Cruz stands apart from other “campaign conservatives,” because unlike many candidates who say when thing while on the campaign trail but do another once elected, Ted Cruz actually keeps his promises. When Ted Cruz campaigned for the Senate in Texas, he promised the Texan people that he would fight their fights, and stand up for their values. Since taking office in the Senate, Ted Cruz has done exactly that. He has not compromised but instead has led the fight to repeal Obamacare, helped lead the fight against amnesty, and has stood up against the cronyism present in both political parties.

Third, he is the only candidate running who has been willing to stand up to the leadership of his own party time after time. In the Senate, Ted Cruz has been willing to fight for our values and to boldly stand up to not only the Democrats but to his fellow Republicans as well. In February of 2013, President Obama wanted Congress to raise the debt ceiling, so he could continue his irresponsible spending. After the bill to raise the debt-ceiling passed the House, the measure was introduced to the Senate for consideration. Under ordinary Senate rules, raising the debt ceiling required a minimum of 60 votes, unless all 100 senators agreed to change the rules to allow a simple majority vote. Shockingly, the Republican leadership urged all 45 Republican senators to unanimously consent to change the rules to allow a simple majority vote. If all 45 Republican senators unanimously consented with the 55 Democrat senators to change the rules to allow a simple majority vote, then the Republican Senators could all go home and tell their constituents that they had fought to stop the debt-ceiling increase, but had failed. When the Republican leadership pressed the 45 Republican Senators to simply go along, only Ted Cruz, along with Mike Lee, stood up in demanding a 60-vote threshold. The Republican leadership was infuriated that Cruz would not allow them to dishonestly mislead their constituents. When the Republican leadership could not change the rules by unanimous consent, 12 Republican Senators joined the Democrats in passing the debt ceiling increase. Although our own public officials have so often betrayed us, Ted Cruz has kept the promises he made to the Texans who voted him for Senator. When you vote for Ted Cruz, you can rest assured that he will keep his word. In Ted Cruz we have a candidate who is more than a career politician, because Cruz is a trusted statesman committed to the cause of liberty.

Fourth, I believe that Ted Cruz is the candidate with the best chance at defeating the Democrat nominee in the fall. Some would argue that a consistent conservative cannot win a general election, so therefore we must settle for a more moderate candidate. Let me simply respond to these skeptics by asking, “Where are Presidents Dole, McCain, and Romney?” Why did they not win against Democrat candidates? Bob Dole, John McCain, and Mitt Romney all won their party's nomination, yet failed to win in the general election because they refused to stand by principle, instead watering down their message in an attempt to attract voters from the other side. I believe that we will only win elections when we draw a stark contrast between conservatism and liberalism. We will win when we stand by our principles, not when we abandon them. Cruz himself has said that we need to “nominate a candidate who is as committed to conservative principles as Barack Obama is to liberal principles.” I believe that Ted Cruz would be a strong general election candidate who would attract voters in two ways. First, Cruz would motivate the conservative base to turn out in greater numbers. He would attract evangelicals and disaffected conservatives who stayed home in previous elections because they were reluctant to support a Republican they felt did not truly share their values. Secondly, I believe that Cruz would attract Democrat voters who are tired of career politicians who just play politics rather than standing by principle.

The American people are ready for a President who speaks the truth and keeps his word. I believe that Cruz will attract voters who see in Ted a candidate they can trust to do exactly what he says. Ted Cruz can connect with voters because Ted Cruz has the unique ability to communicate the conservative message with clarity and boldness. But there is one more important thing to mention about Senator Cruz. He is a former Princeton debate champ! When he hits the stage to debate, truth goes forth in a clear and concise message. If we nominate a committed conservative like Ted Cruz who will stand for principle and expose the lies of the left, this is how we will win in 2016.

Fifth, Ted Cruz is a born-again Christian who loves the Lord and is not ashamed of his faith. Proverbs 29:2 says, “When the righteous are in authority the people rejoice but when the wicked rule, the people mourn.” Our country's greatest problem is not the economy, the military, the national debt, or the liberal agenda of the left. Our nation's problems all stem from our nation's greatest sin, the sin of forgetting God. Jonah chapter 3 describes the repentance of Nineveh, a national repentance that began with the king of Nineveh, who first humbled himself, and then called Nineveh to repent. In like manner, we need as President a man who recognizes our nation's sin against Almighty God and who calls for national repentance and a returning to the Lord. We need more than a candidate who promises to “make America great again;” we need a candidate who will lead the nation in righteousness. Ted Cruz has said that “any President who does not begin every day on his knees is not fit to be commander-in-chief of this country.” This is the type of man we need as our next President.

As conservatives, we must remain divided no more, but we must coalesce around a candidate who fights for our fights and share our values. This may be our best chance in a long time to elect a committed conservative to the White House. If you believe in the Constitution, Biblical values, and limited government, then Ted Cruz is your man. If you believe that America is still worth fighting for, I encourage you to get out in the primaries and cast your ballot for Ted Cruz. Join the movement of courageous conservatives, and together we can take this country back and once again reignite the promise of America. To learn more, go to tedcruz.org.

Below is a video clip you may enjoy watching. It is a recent interview/endorsement with Marlin Bontrager and the Benham Brothers that was done backstage one day at the recent Bible Bee Game Show.
Also visit Chelsy's Blog for her article posted today, "A Call To Action...Your Duty To Vote".

Posted by Bontrager Family Singers at 10:00 AM