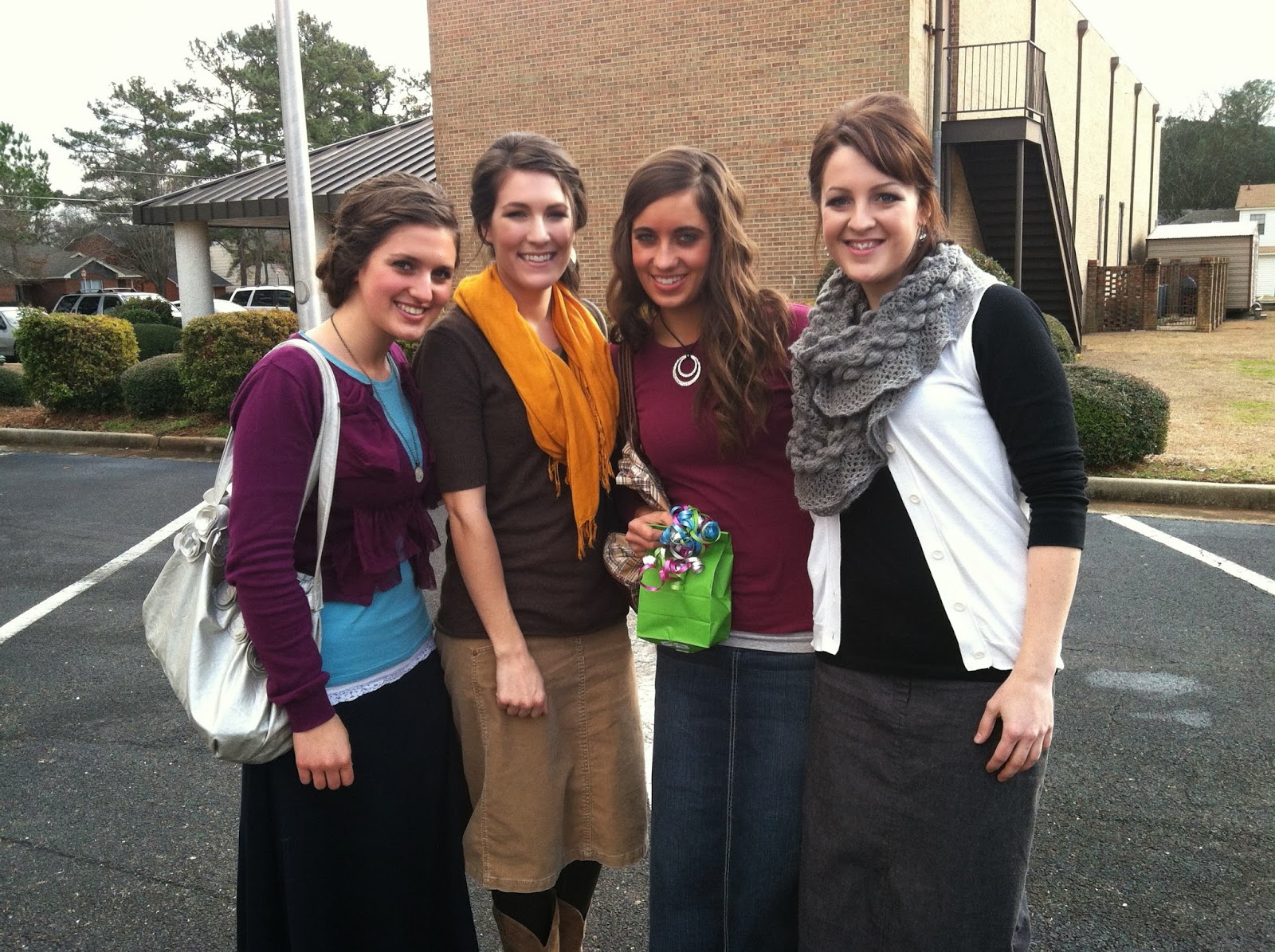 Our ReNew Hope Prison Crusade week in Alabama started off great and we were anticipating a full week of prison services.
As always we enjoyed the morning devotional time on Monday and spending time with friends afterwards. (above)
Monday night we had an amazing prison service. (to read about it  go here) 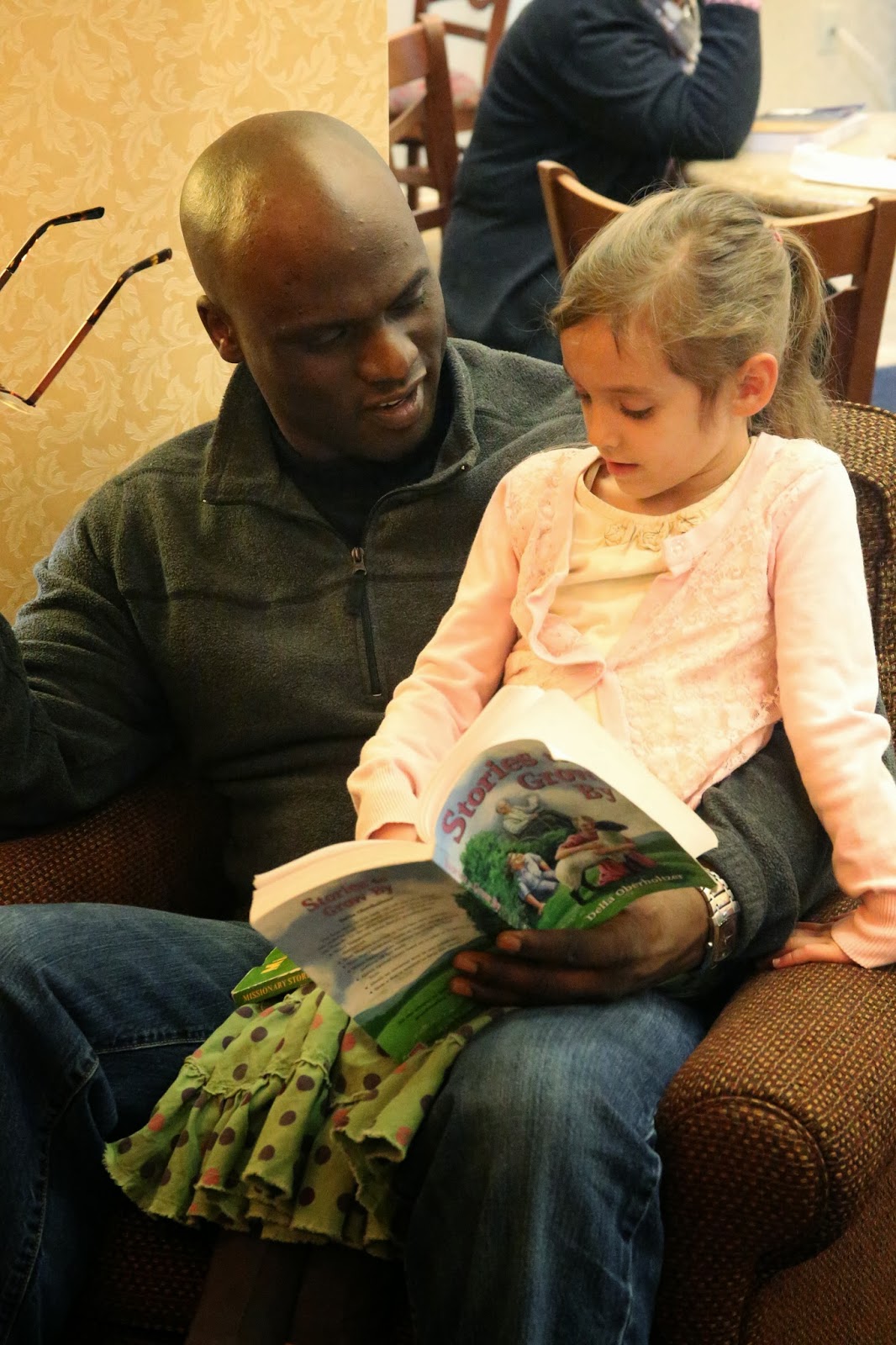 Rebecca enjoying story time with our friend Troy @ the hotel. 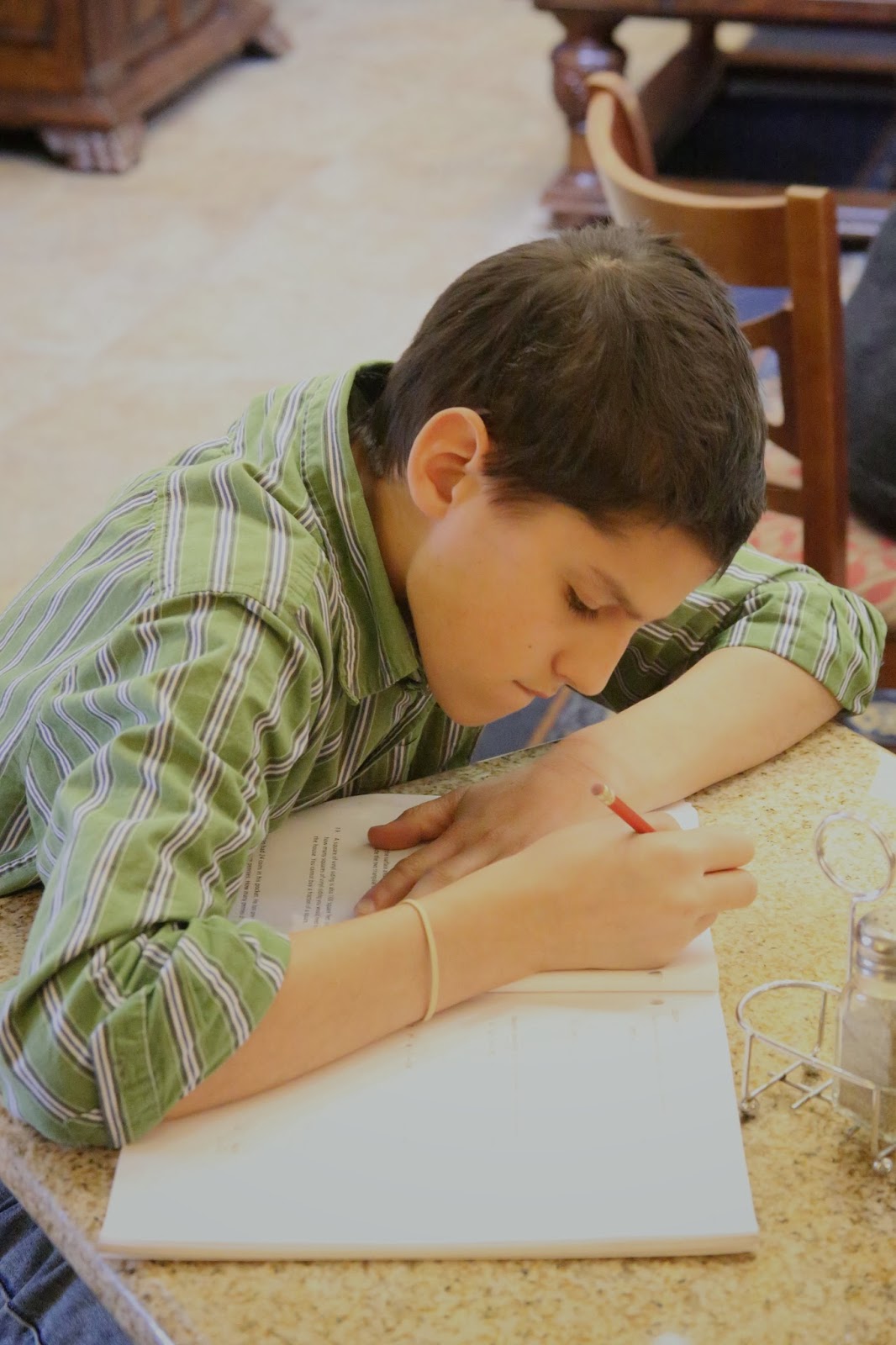 On Tuesday the ice and snow started.
And it just kept coming and coming.
We spent Tuesday cooped up (more or less) at the hotel, since all prison services were cancelled.
The hotel lobby was home to school books, instruments, and people. =)
I had to laugh-wondering what the other "non-crusade" hotel guests thought of the constant live gospel music happening in the lobby. =) 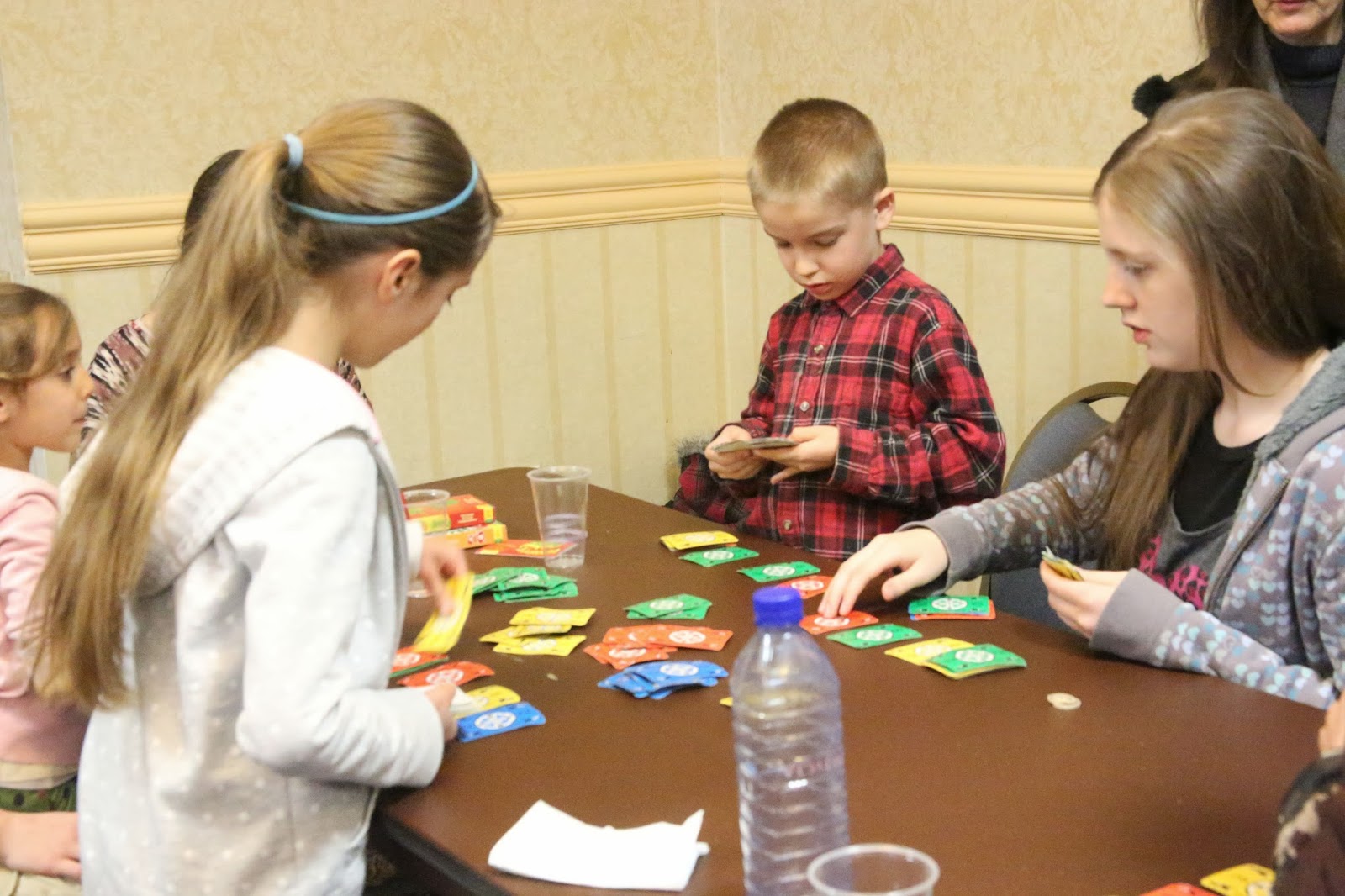 passing the time with games... 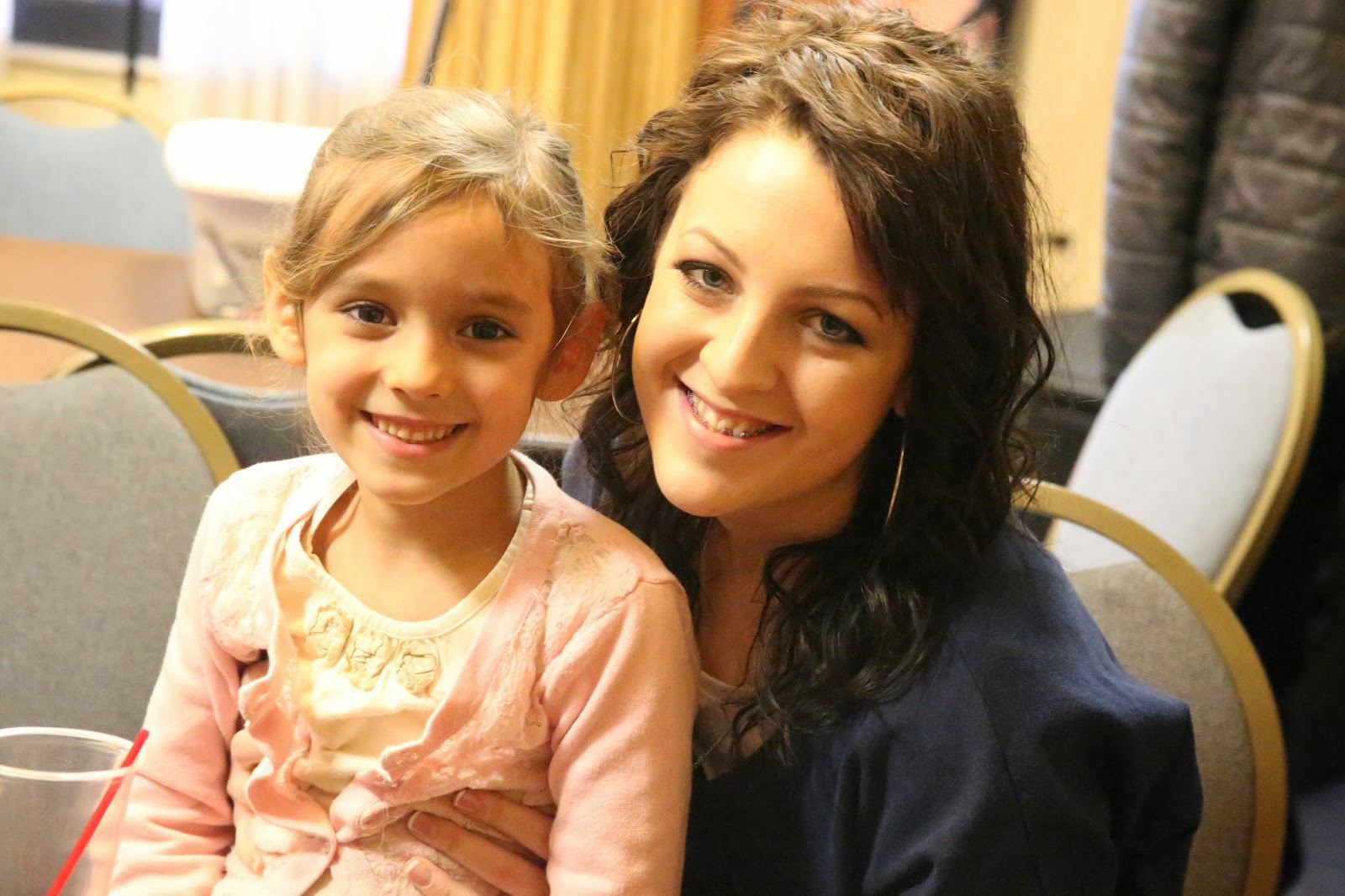 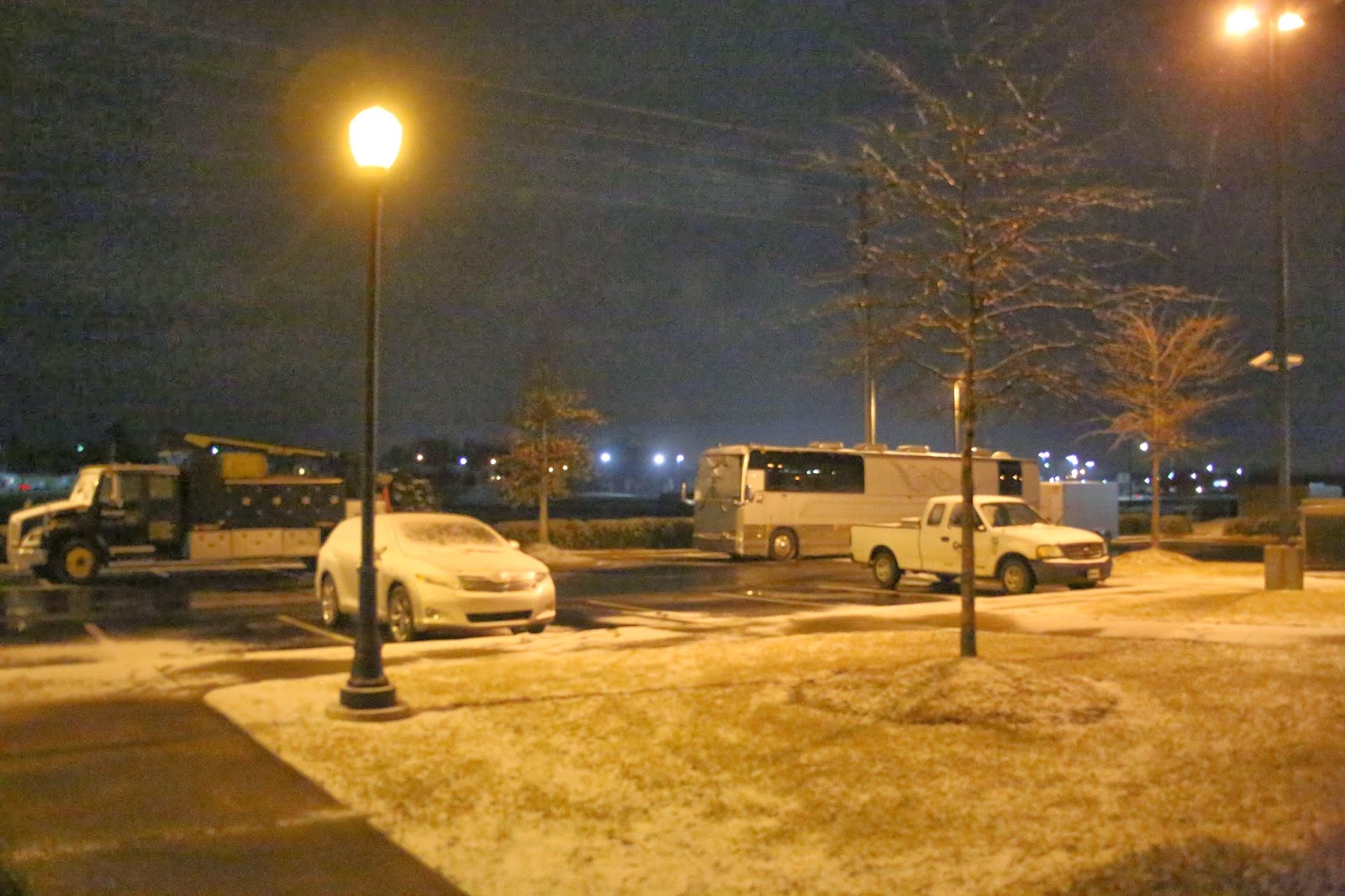 The outside world on Tuesday evening.
Everything shut down. Restaurants, stores...even Walmart!
These southerners have NO CLUE how to do snow and ice. It would've been funny except that it really was serious. We watched the news in the lobby to stay up on the weather conditions and what was happening, and we found out that just in Montgomery alone there were four people killed that night from accidents on the highway.
Even though we would've all much rather been in the prisons each day, we were thankful for the opportunity to be together and be safe at the hotel. 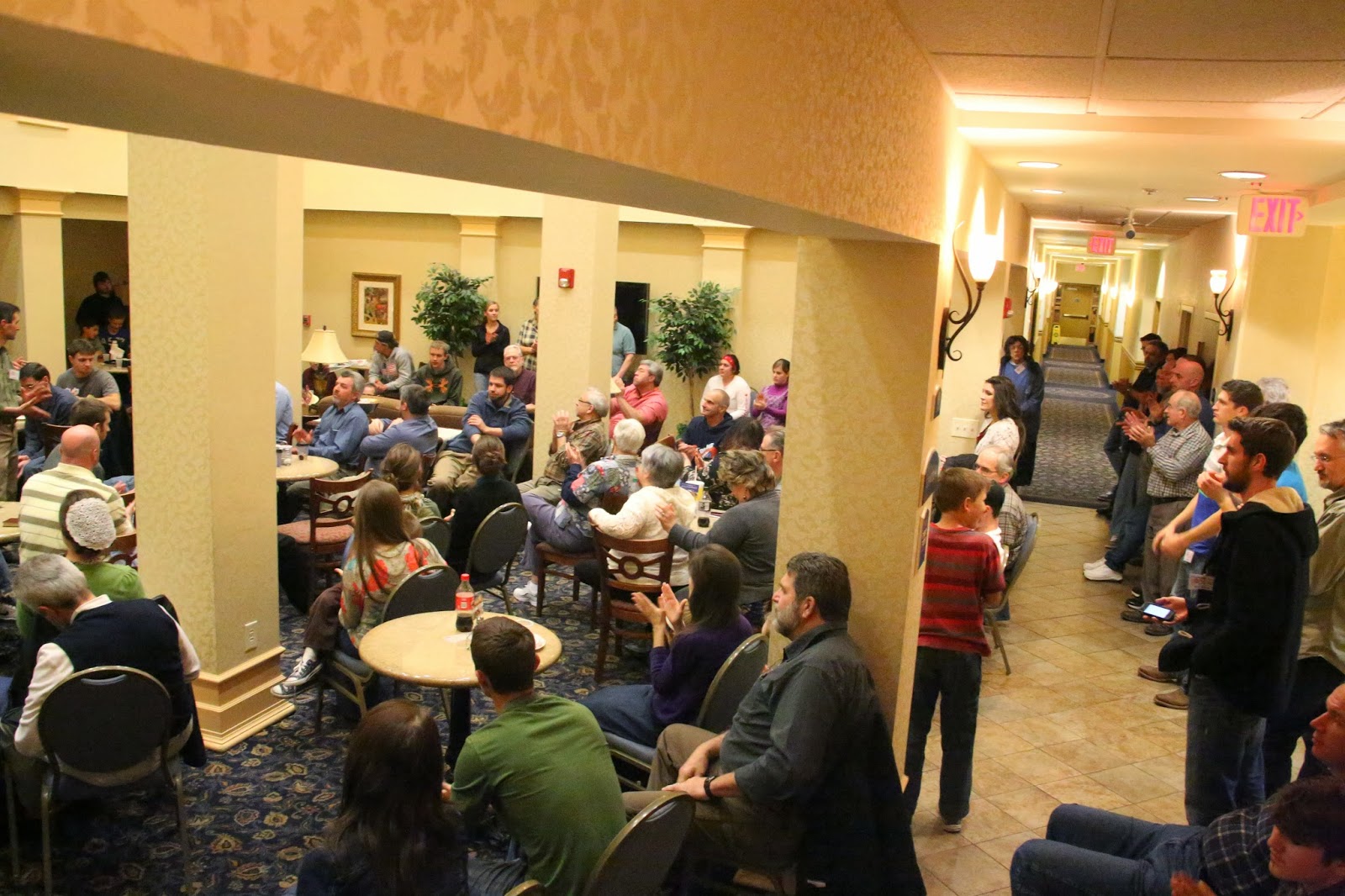 We decided to make the most of the circumstances and host a pizza party for all the volunteers and music groups that were stranded together at the hotel.
We ordered pizza and sides from Costco and had a great evening of food, sharing testimonies, prayer time, and jamming. 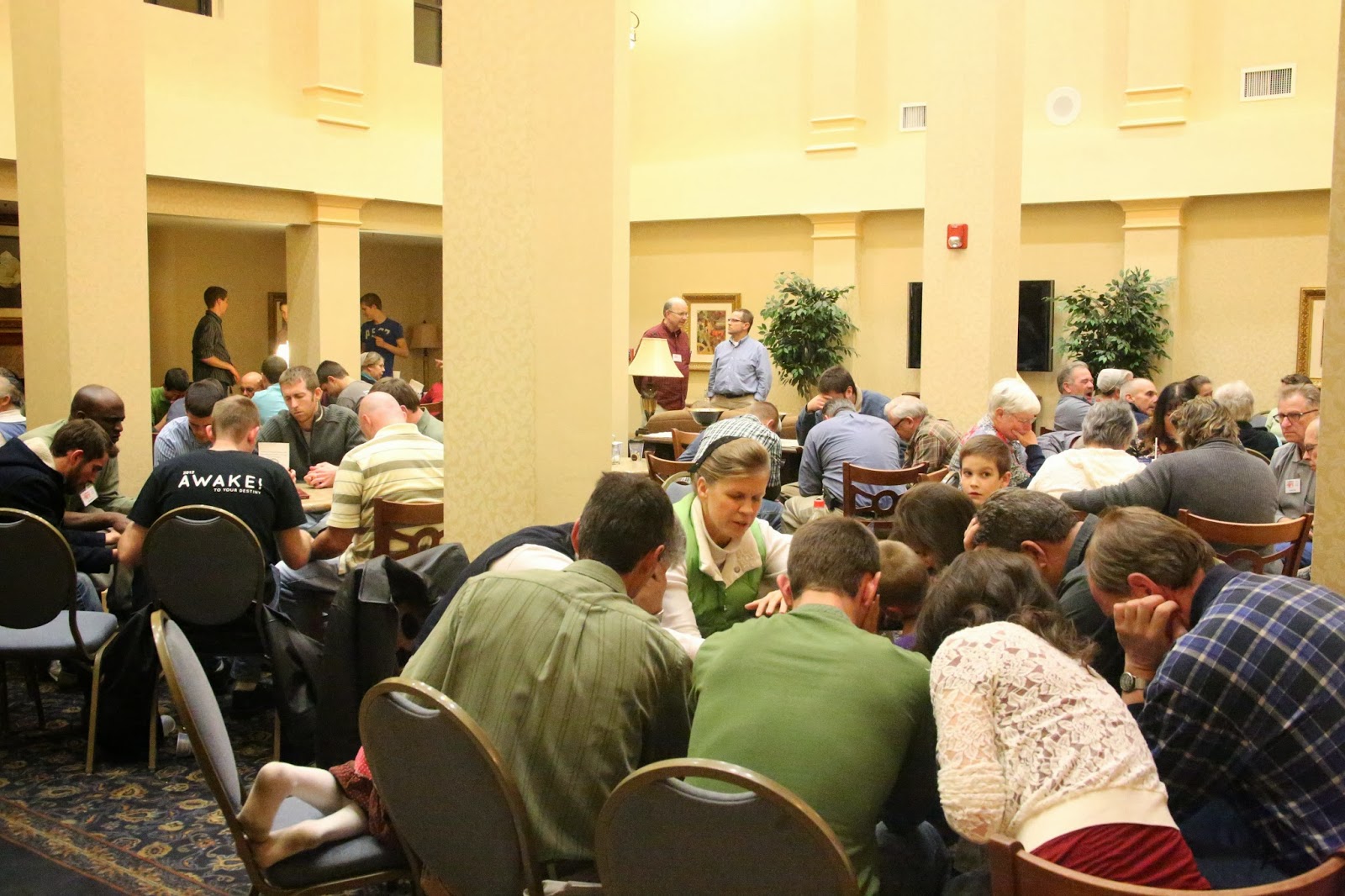 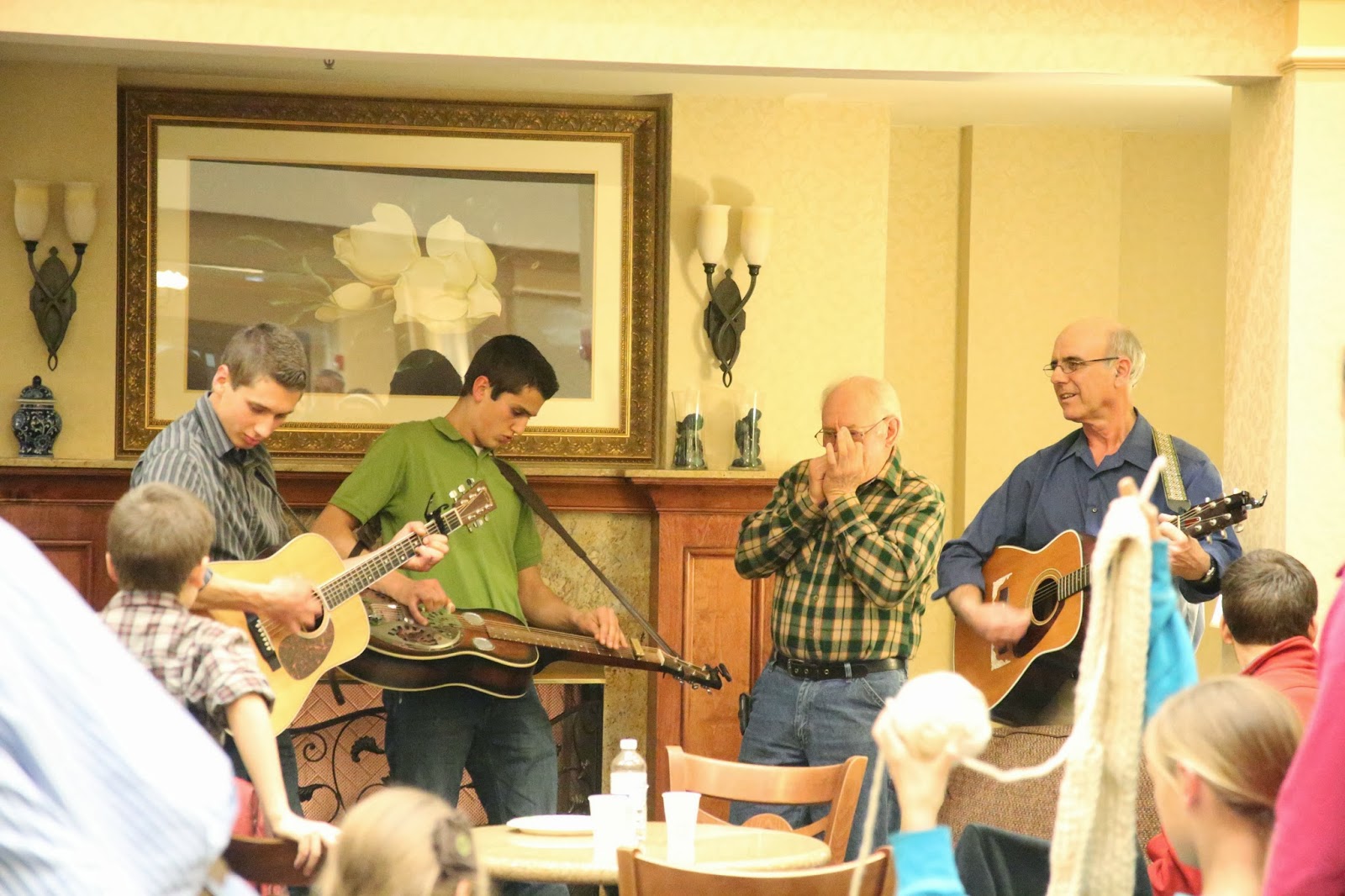 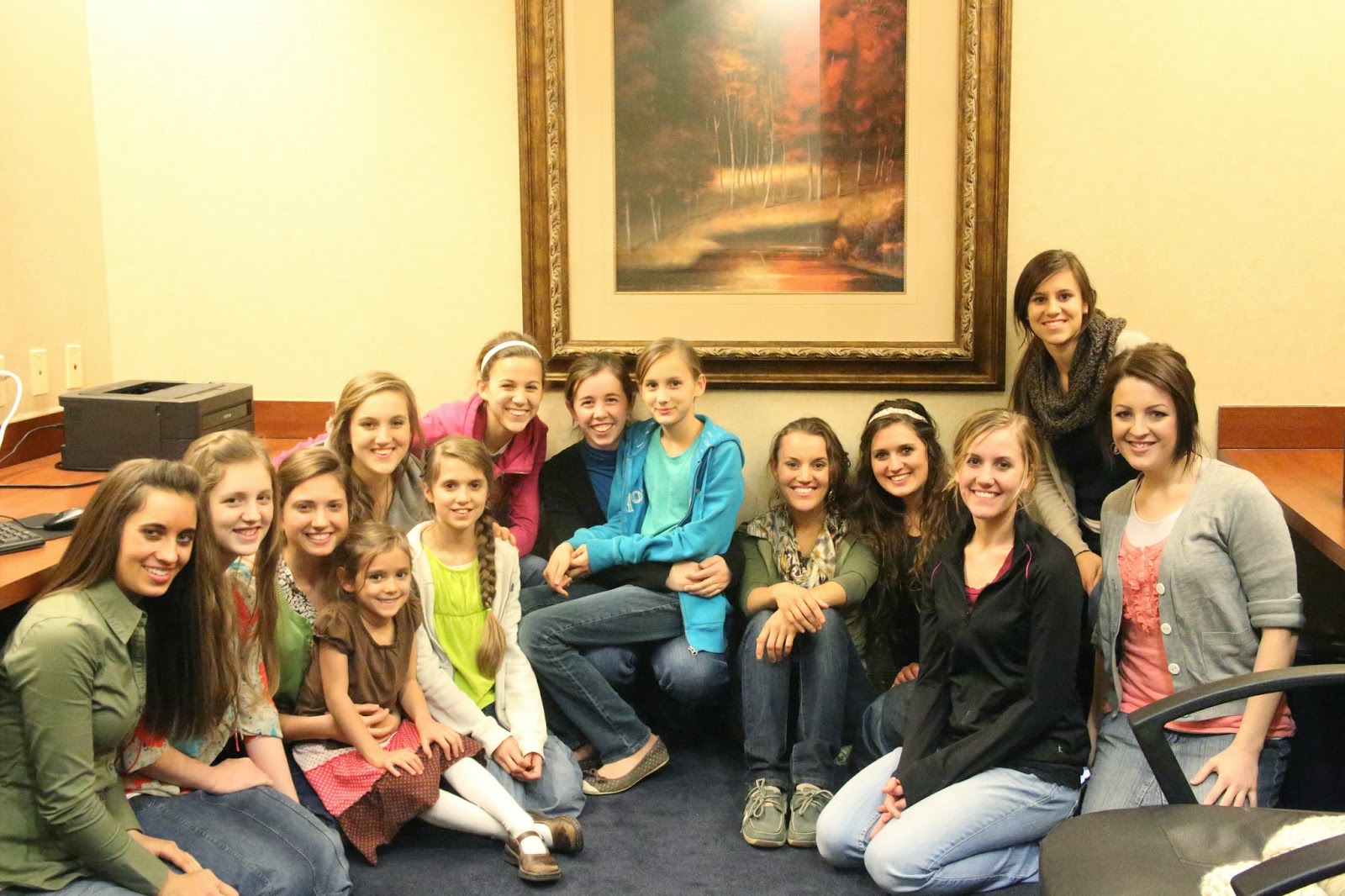 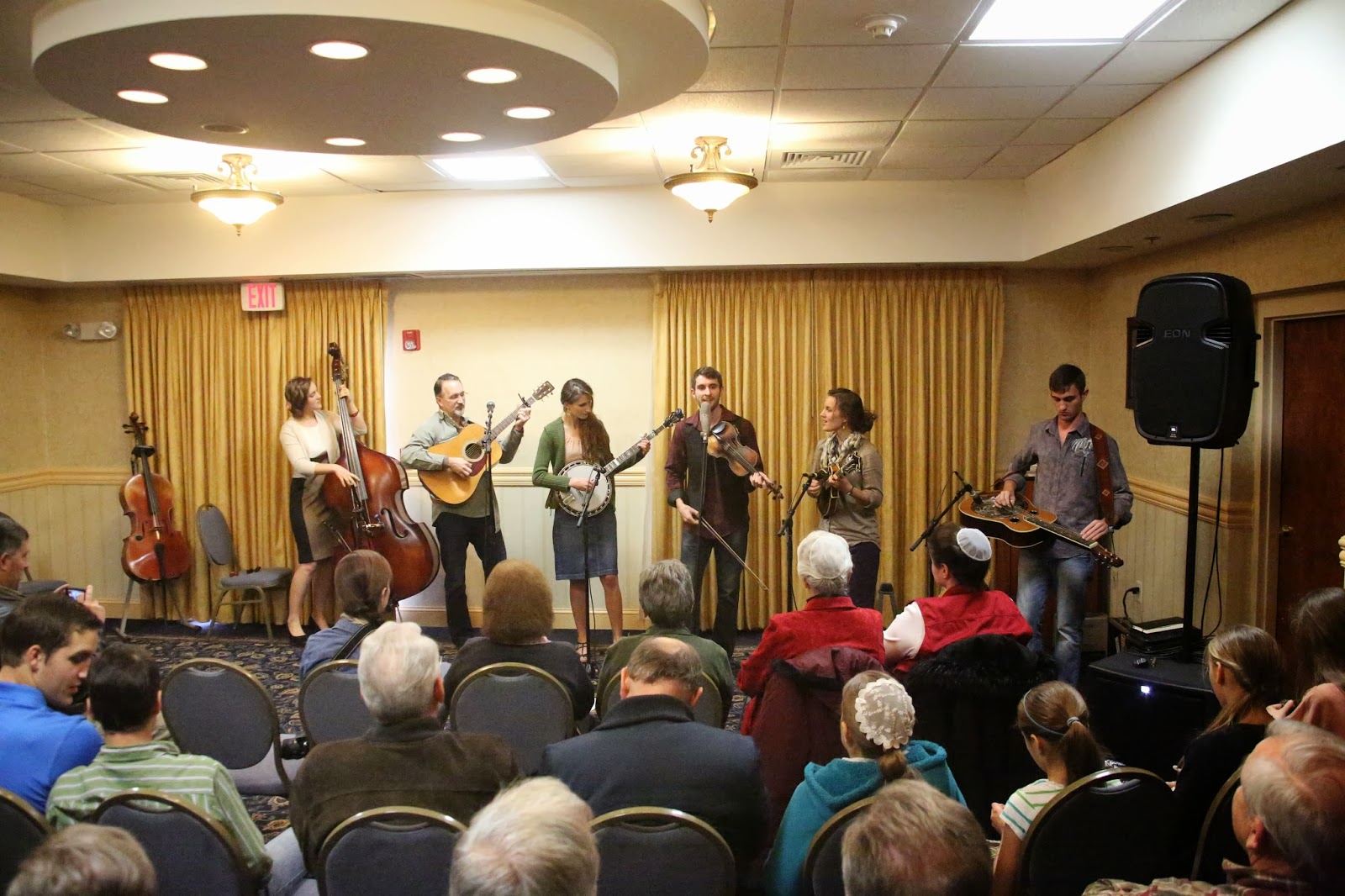 Tuesday noon one of the other family bands set up their equipment and gave two concerts in one of the hotel conference rooms. 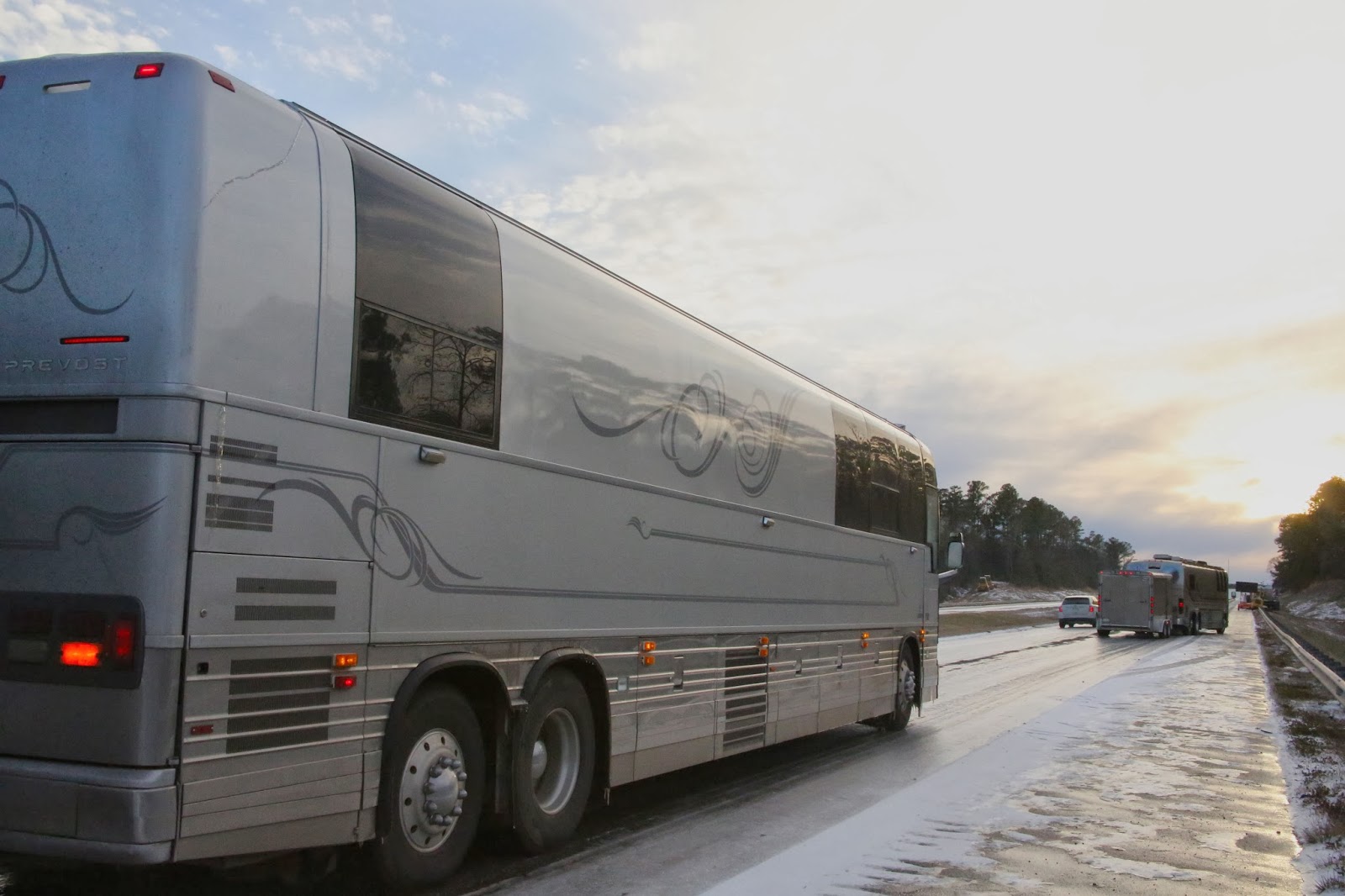 Early in the afternoon our family and one of the other singing families headed out with our buses and began the drive south to Atmore, where we were scheduled to sing in prisons on Wednesday and Thursday. All roads had basically been shut down and the news told everyone not to be driving. But we wanted to get down there so that we would hopefully at least be able to get into those prisons. So off we set. 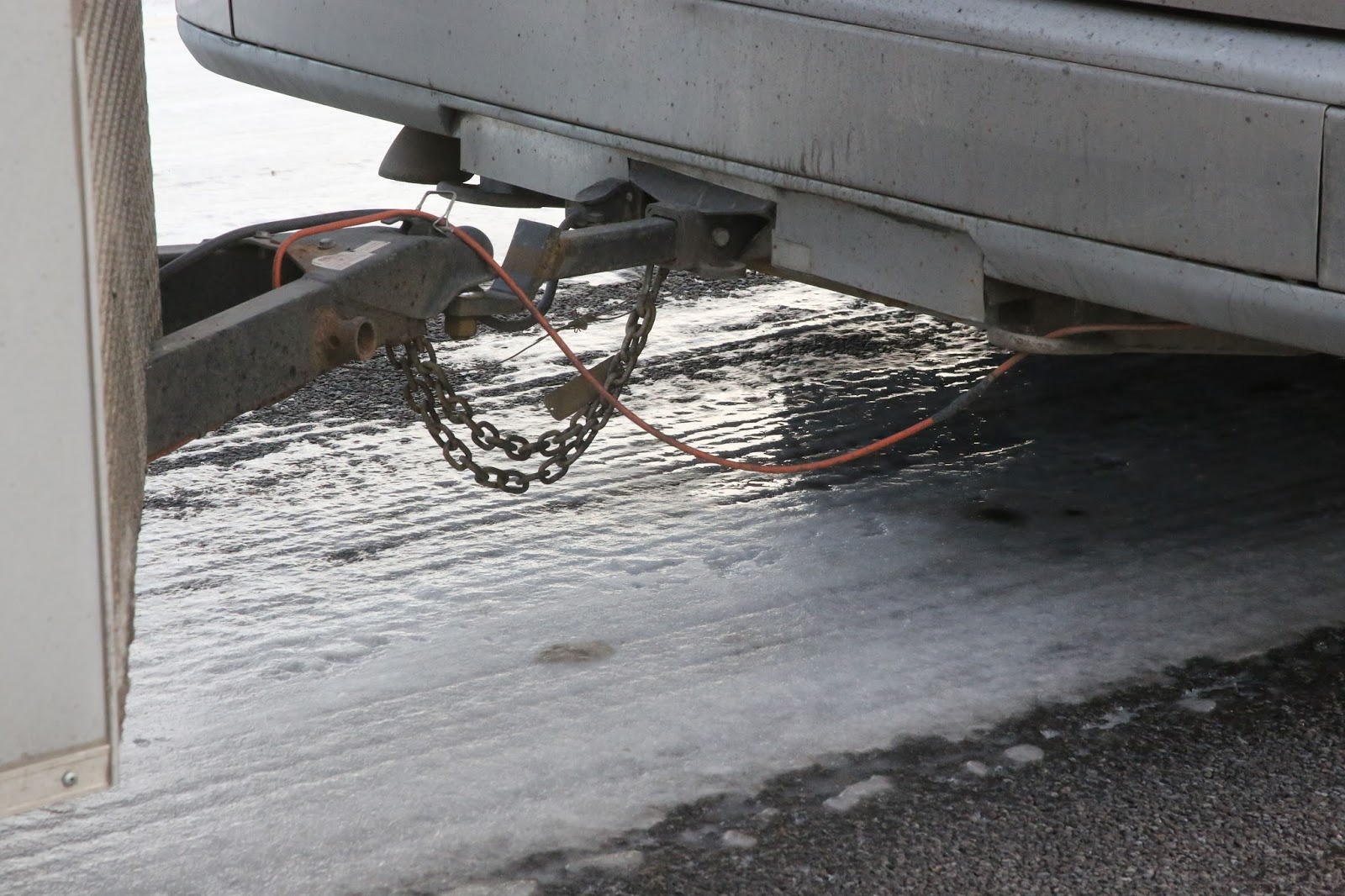 Driving in this was not ideal. But we made it okay until about 10 miles before the Atmore exit.
And then the trouble began. 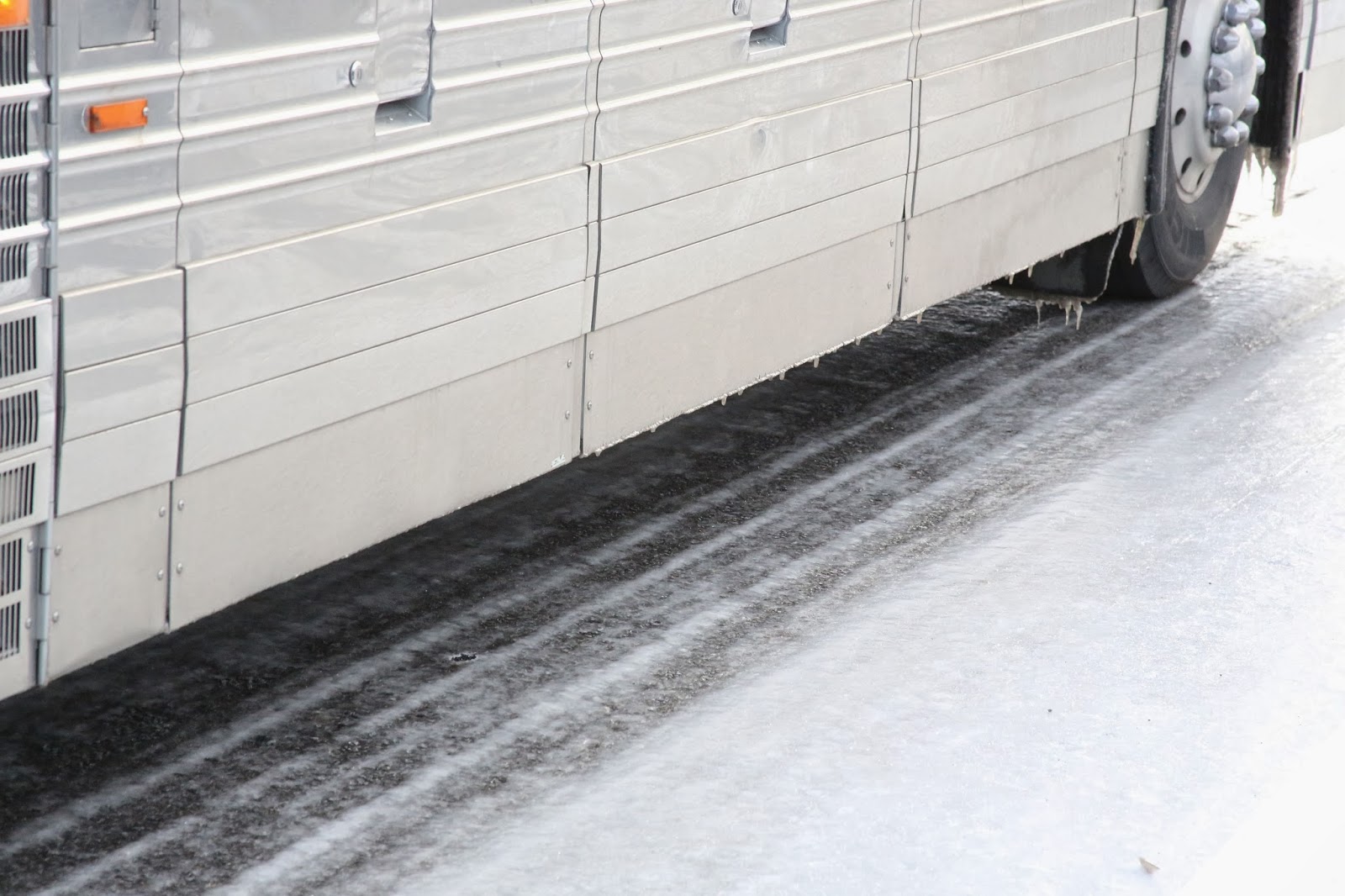 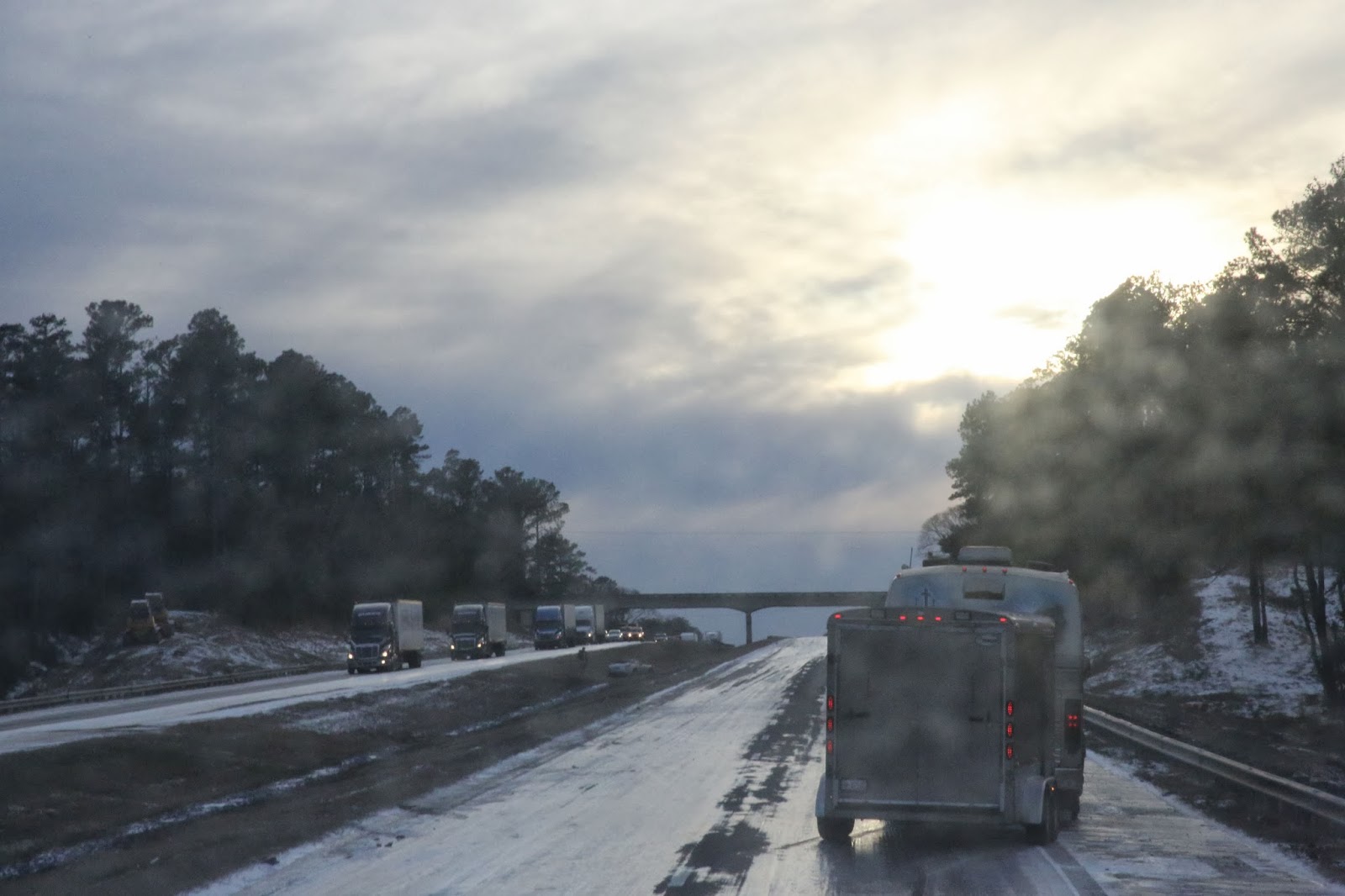 Before we knew it things had changed from ice to literally an interstate of glass. The traffic was a mess.
The above picture is of our friends' bus. I don't know how long it took them to get up this hill. We were behind them and had to wait until they finally made it to the top so that we would have enough room for a "running start". But in the meantime, while we were waiting for enough space between us and them...other semi trucks began to pass us and try to get up the hill. Of course they got stranded because they didn't have enough space to get a good start. It was such a mess!
At one point in the afternoon there were three lanes of traffic-the two original lanes, and then the people who were trying to get up the hill by driving on the shoulder. It was barely safe to get out and take pictures but I got a few anyway. =) 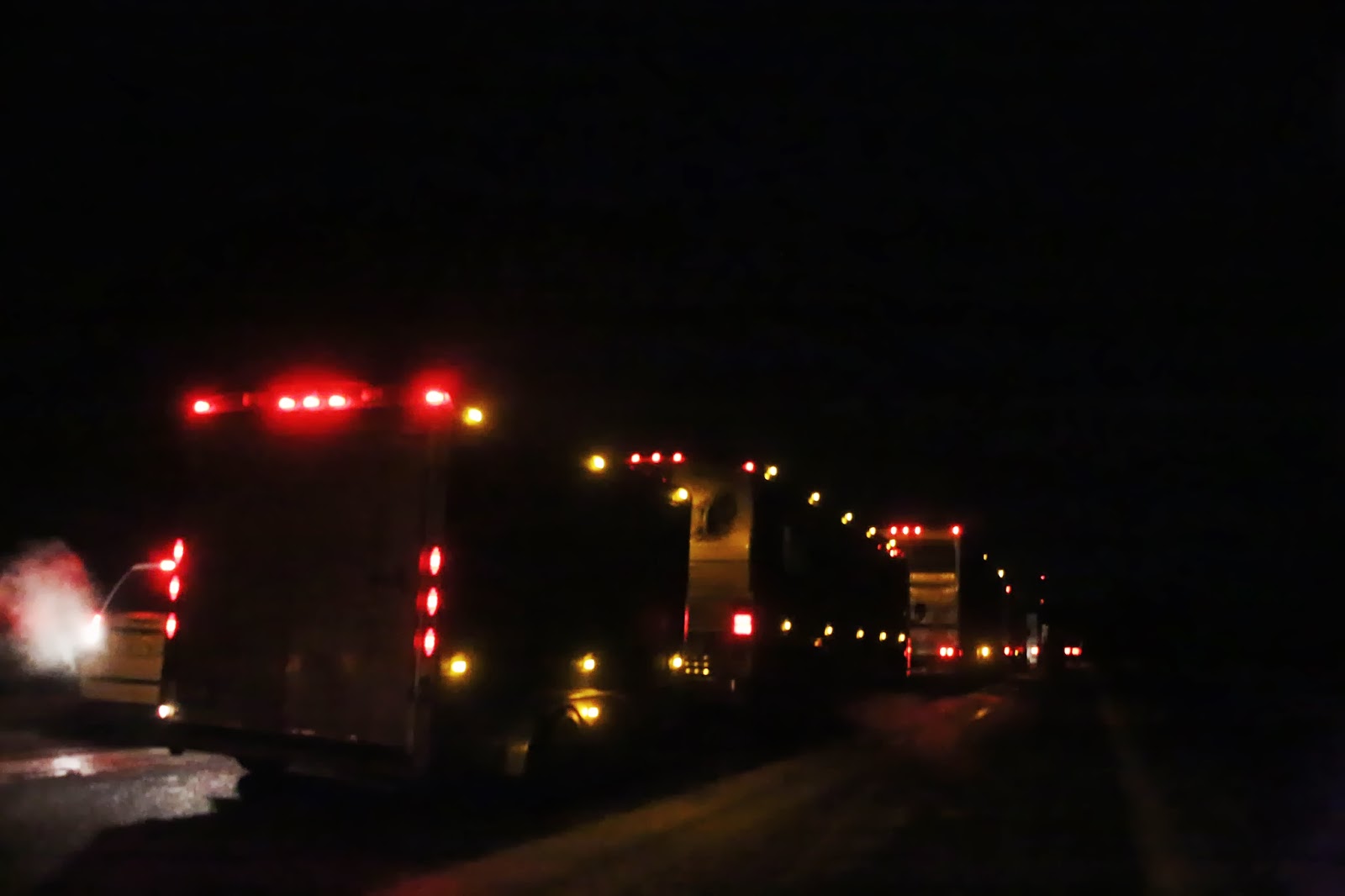 By five o clock we were in a full-fledged traffic jam. We literally were going nowhere, and as far as we could see in front and behind was vehicles. 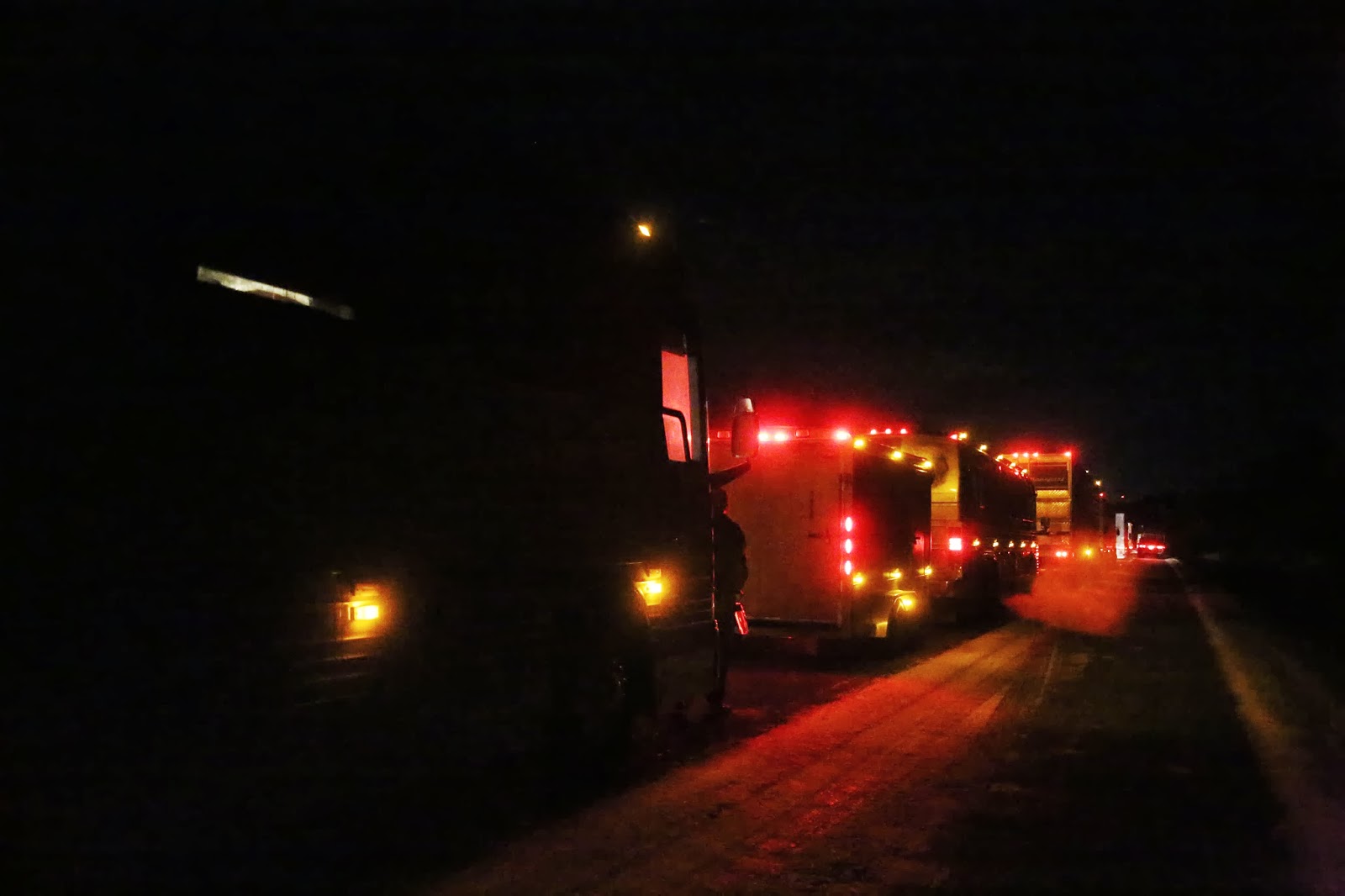 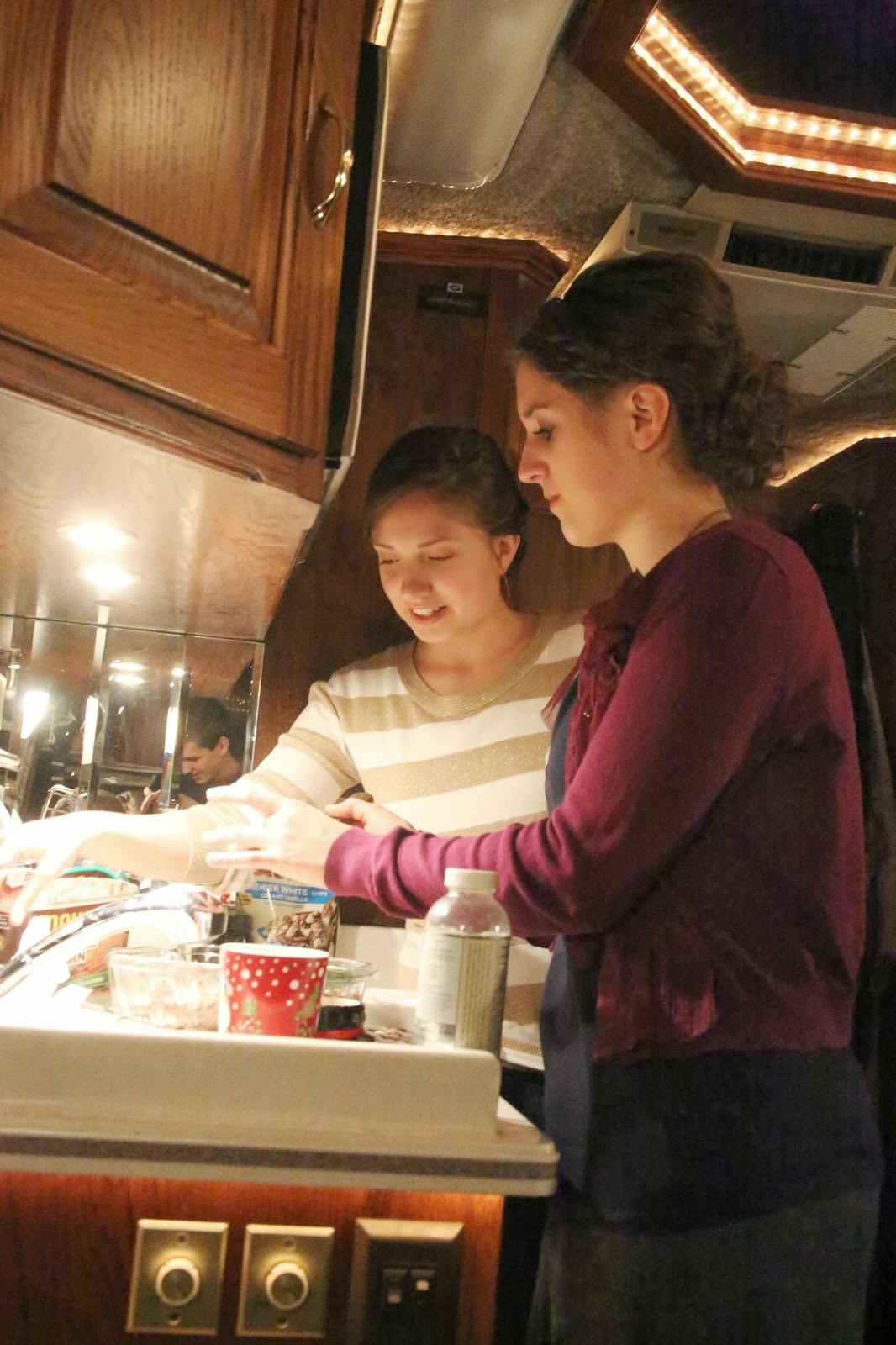 We were oh so thankful for our dear friends-it made the wait much more enjoyable to be able to spend it with them.
Various members of both of our families "slid" (yes, we did-on the ice!!) back and forth from their bus to our bus for games, conversation, and food.
We had to feel bad for all of the other people stuck in the jam who didn't have food options or bathroom facilities like we did.
We had some crazy moments that happened. Such as...
at about eight o clock when both fathers happened to be in our bus, and they were both on the phone with the town rescue/tow truck/bad weather control/whatever-they-are-called, people.
We found out that there were multiple accidents/people stuck along the line of traffic. Vehicles would try to make it up a hill only to slide back down into the vehicle behind them.
The town sent out four tow trucks, and three of them got stuck trying to pull people out.
The whole thing was kind of funny to us, because in the north this type of thing (ice) happens all.the.time, and people are prepared and know how to deal with it.
Down here, they don't even have salt to put on the roads. And the tow trucks get stuck trying tow other vehicles. wow. that's the south for you!
another funny thing that happened was the tow truck lady who told us on the phone,
"Y'all just be thankful-there are some people who have been stuck in this jam since 5pm!"
(we didn't bother to tell us that we were that crowd =)) 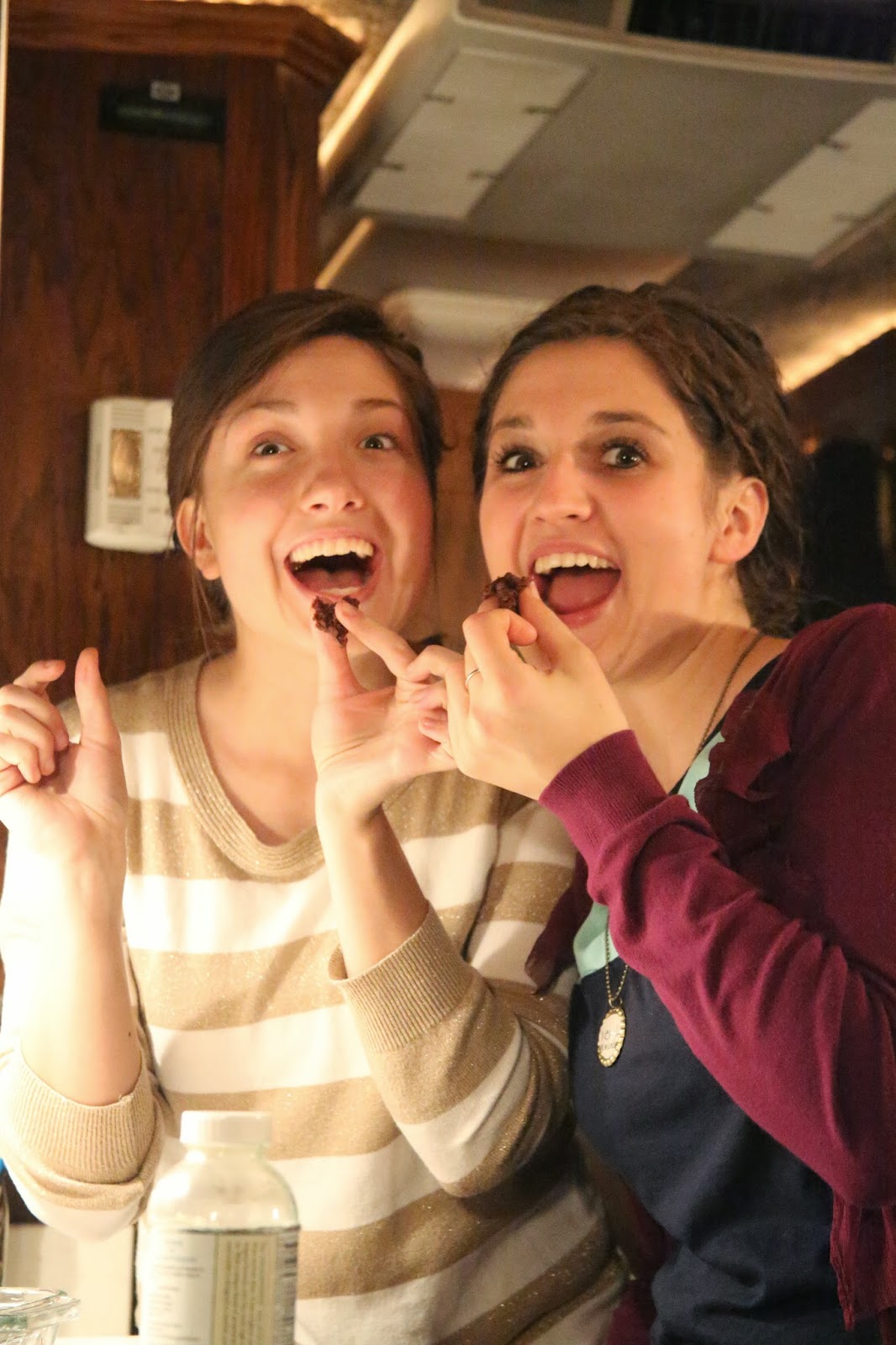 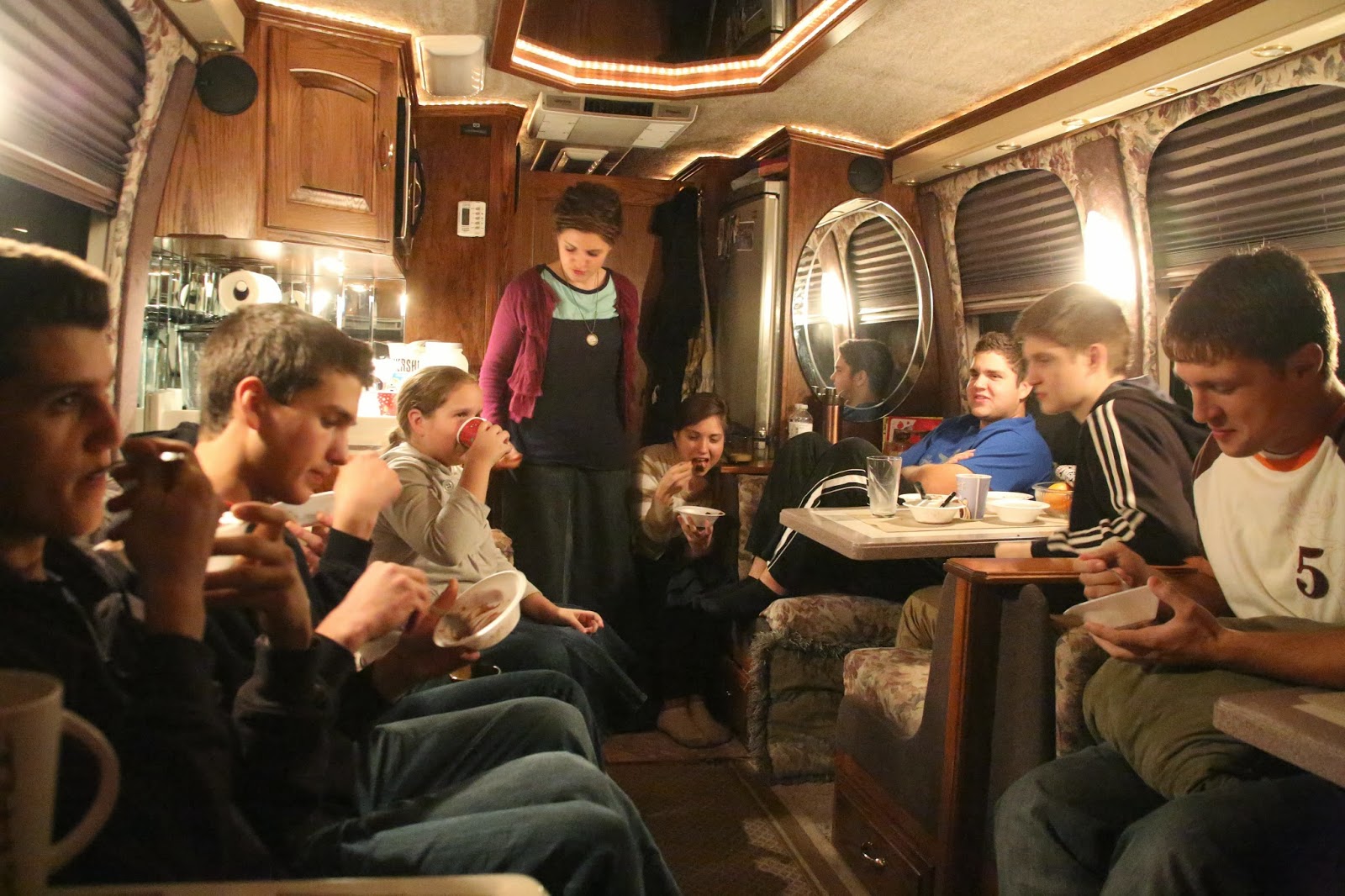 eventually we found ourselves at 10am...and still we had progressed exactly 2/10's of a mile since 5pm. (how's that for discouraging?)
younger ones and parents retired for sleep. and the older ones stayed up to "keep watch" for if the traffic ever started moving again.
To pass the time, we enjoyed fresh (and very gooey!) toaster oven brownies, icecream and milk,
and we played several rousing games of "Church" (aka Christian Mafia =))
If you've played mafia before, you know that a portion of the game is spent with everyone's eyes being closed. Well...it was during one of these "eyes closed" segments that we heard a loud knock on the bus window. Of course all eyes flew open. =)
Upon investigation...we found that it was an officer who was going along the line of traffic to inform everyone that the line was going to start moving again.
Yay for moving!! 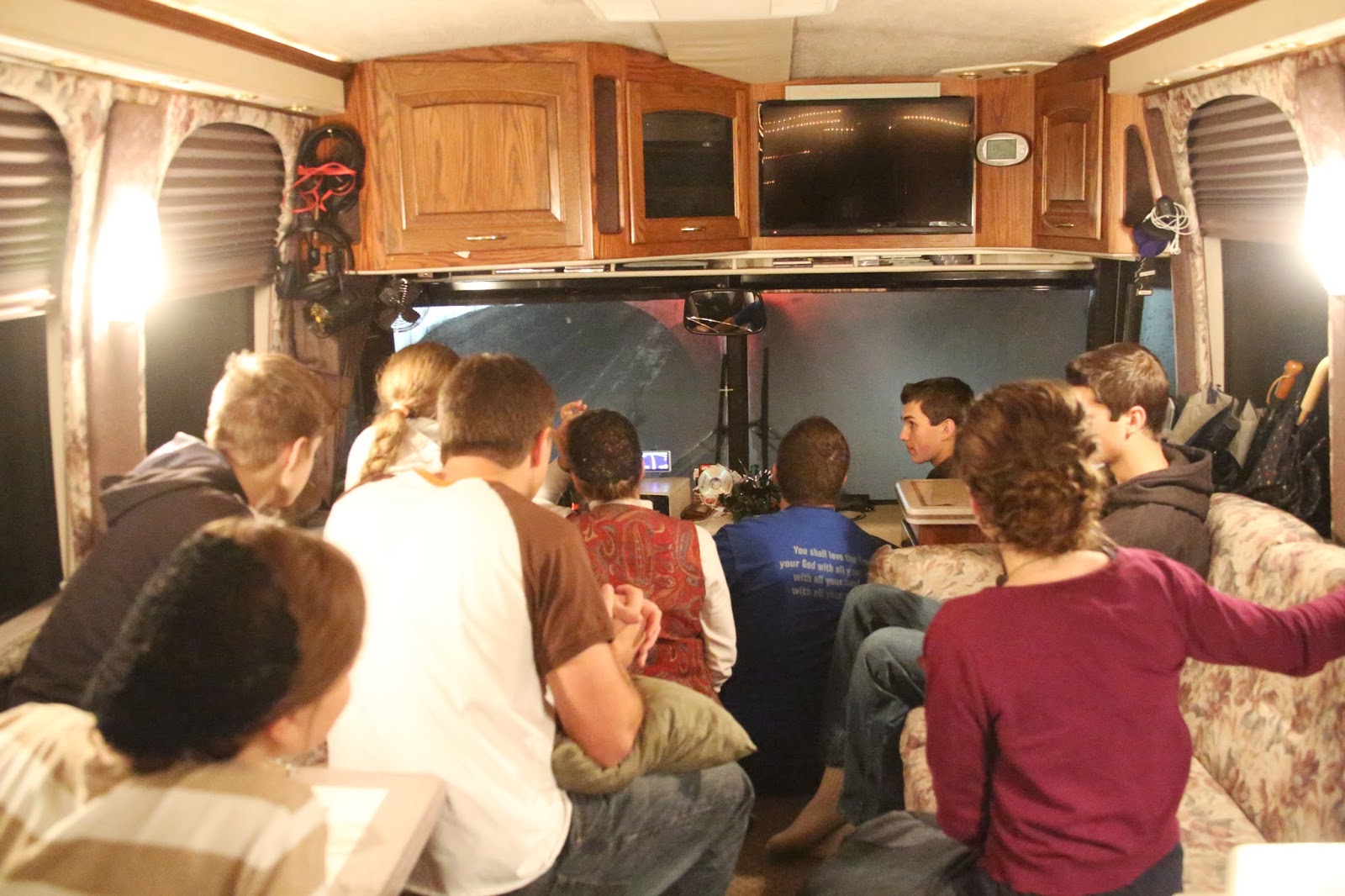 watching the action from the front of our friends' bus. 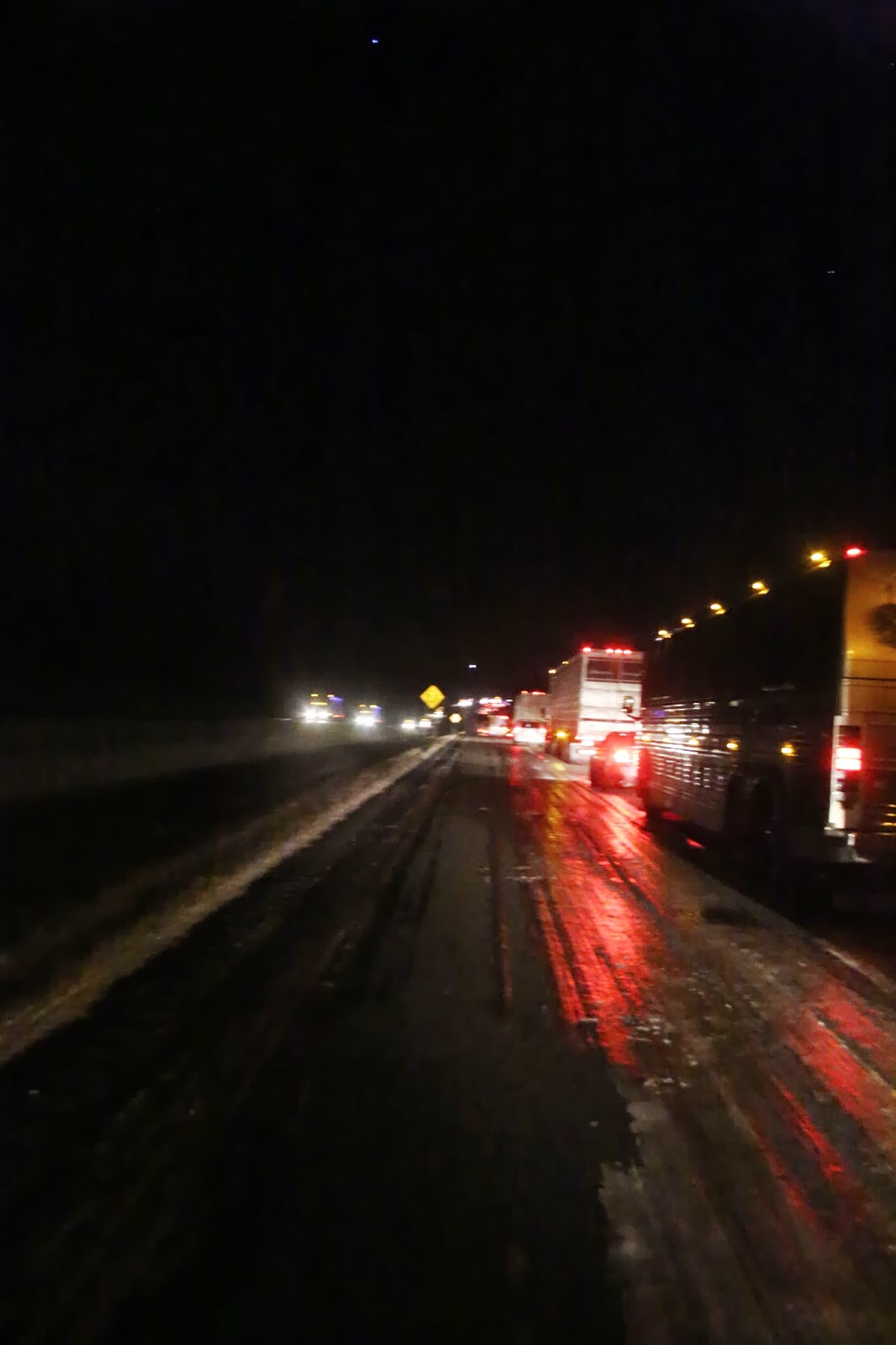 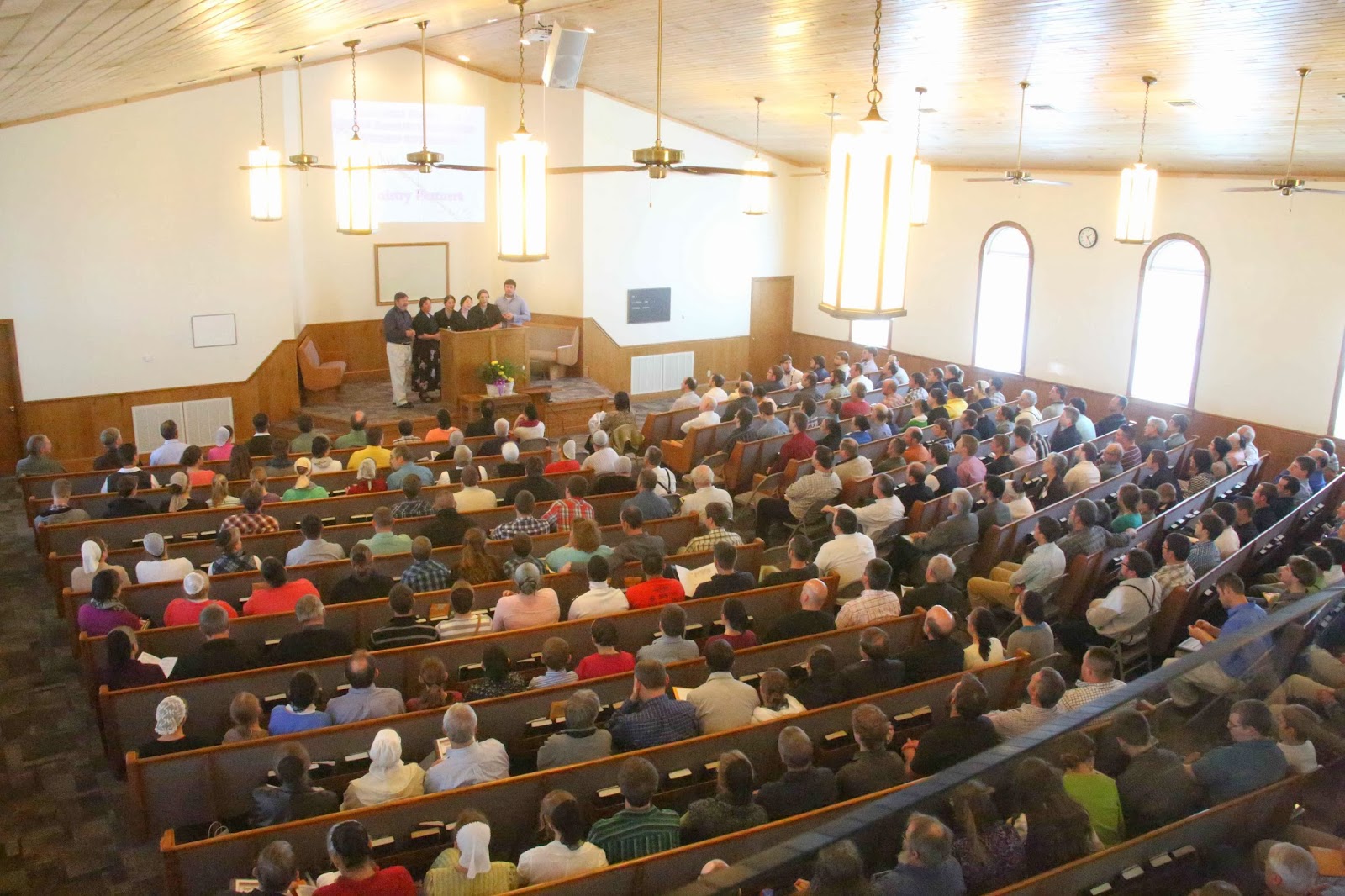 We had orientation on Sunday and our first prison service Monday night.
And guess what started this morning?
Snow. Lots of snow. It snowed all morning. And the ice-storm is supposed to be right on its heels.
The state has shut down all prisons for the remainder of the week.
And this is SOUTH CAROLINA.
Just goes to show...this year the north does NOT have the monopoly on the snow and ice!

We are trusting God that He has a perfect plan in all this. It is so disappointing for us all but we are grateful for safety and God's protection.

posted by chelsy
Posted by Bontrager Family Singers at 5:07 PM