Why We Endorse Rick Santorum

With super Tuesday just one day away, we are asking for American citizens to consider voting for Rick Santorum. Mr. Santorum is the ONLY remaining candidate who is TRULY Pro-Life. Not only does he say that he is against the murder of babies in our country, but as president he will back up his words with actions, which is more than any of the other candidates can say. ( By the way, the Declaration of Independence says that "We hold these truths to be self-evident, that all men are created equal, that they are endowed by their Creator with certain unalienable Rights, that among these are Life, Liberty and the pursuit of Happiness." ) Saying that he is Pro-Life and then passing the issue on to the states does NOT make Ron Paul  Pro-Life. How can Mr. Paul call himself Pro-Life and then let it up to individual states to determine the issue? If some states choose abortion, babies still get killed.
Our country needs a leader who will actually back up their words with action. 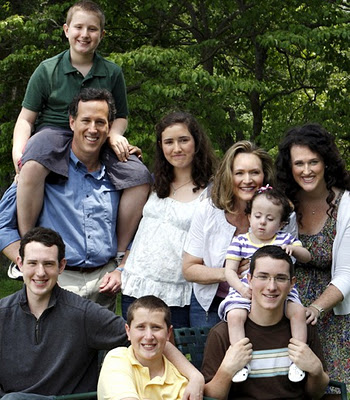 Santorum believes in life, marriage, and strong family values.
Tomorrow is an opportunity to vote for a man who has consistently supported the most important issue out there - protecting the unborn child. Not only has he voted against abortion but he has also supported bills that offer assistance for mothers, tax credit for adoption, abstinence programs, & much more.  Here is a list of bills that he has supported, sponsored, & co-sponsored:


In the U.S. Senate, he authored two of the priority pro-life efforts that were signed into law by President George W. Bush – the Partial Birth Abortion Ban Act and the Born Alive Infants Protection Act.  He cosponsored and strongly supported numerous other bills that defended unborn victims of violence, ensured state laws on parental consent are observed by neighboring states, and championed legislation to protect the conscious rights of individuals and health care providers so they need not choose between their work and their moral principles.  He steadfastly opposed the federal funding of abortion and supported President Reagan’s Mexico City Policy (abandoned by President Clinton and President Obama) that kept U.S. taxpayer dollars from going to organizations that perform or promote abortion overseas.
Recognizing that many women who consider abortion do so because they don’t believe they have the support necessary to care for their unborn children, he supported bills to provide funding to the nonprofit organizations that help pregnant women in need and their children.  As a member of the Congressional Coalition on Adoption, he supported the expansion of the adoption tax credit to make adoption more affordable to parents across the country.  He supported programs for the vulnerable children and youth in our foster care programs.
On the important bioethics issues facing the nation, he stood firm on his principles of prohibiting federal funding from being used for the exploitation and destruction of human embryos for scientific purposes while he sought to advance adult and other non-controversial stem cell research to aid in the fight against disease.
Abortion
Alternatives to Abortion
Adoption and Foster Care
If you want to know more about him you can visit his website at www.ricksantorum.com.
Posted by Bontrager Family Singers at 8:44 AM